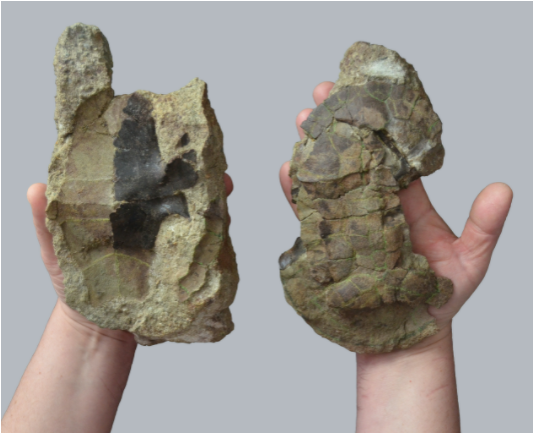 Palaeobiologists from the University of Tübingen have described a previously unknown turtle species that lived in what is now Romania some 70 million years ago. The reptile, measuring 19 cm in length, has no close relatives now but is a member of the larger group of side-necked turtles that are today found mostly in the southern hemisphere. Its closest relative is recorded in more recent fossils dating to about 57 million years ago, also from Romania. This indicates the evolutionary lineage survived the Cretaceous-Paleogene extinction event 66 million years ago, which killed off at least 75 percent of all life forms, including the non-avian dinosaurs. University of Tübingen biogeologist Dr. Márton Rabi headed the research team, whose description of the species has been published in the latest Journal of Systematic Palaeontology. The species is named Dortoka vremiri, after Mátyás Vremir, a key researcher into Cretaceous vertebrate faunas who passed away in 2020.

Working with colleagues from the University of Bucharest in Romania and from Hungary’s Natural History Museum and Eöotvöos Loránd University, the team identified the turtle fossils from the Haţeg Basin of Transylvania. The locality is one of the most important fossil sites for Late Cretaceous vertebrates in Europe, and is renowned for its insular fauna of dwarfed dinosaurs and other species. The site has a research history spanning more than 120 years. Evidence of Dortoka vremiri was found in the 1990s. The find provides a rare insight into selectivity during the end-Cretaceous mass extinction.

How did this small turtle survive when most other species died out? “Intriguingly, members of the same family of turtles did not survive this extinction event in western Europe,” says Felix Augustin, a PhD student and the study’s lead author. The more remote and potentially more protected palaeogeographical setting of the Transylvanian landmass may have played a role in the differential survival of the eastern European turtles, he says.

Another factor may have been Dortoka vremiri’s immediate environment. “The only other chelonian that co-existed with the new species was a land-dwelling tortoise which did not survive the mass extinction. In contrast, this new species was a turtle living in fresh water,” says Zoltan Csiki-Sava of the University of Bucharest, “This fits a previously observed pattern from North American faunas where terrestrial vertebrates were notably more impacted by the end-Cretaceous extinction than freshwater species.” Researchers speculate it may be because freshwater food chains are based on decaying organic material, which remains available even when high environmental stress causes terrestrial food webs to collapse. This pattern has been observed during other extinction events and may be common, however, Márton Rabi says the evidence is still rare.

Such findings take on an urgent significance in the current and ongoing massive extinction of species caused by human activity. Understanding the selectivity of past extinctions is crucial for setting conservation priorities.