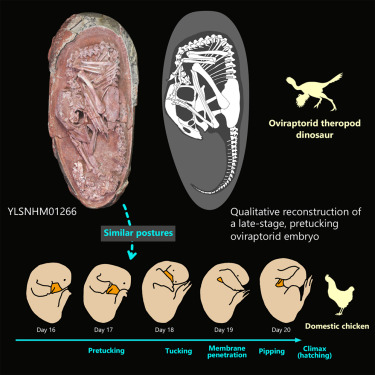 Despite the discovery of many dinosaur eggs and nests over the past 100 years, articulated in-ovo embryos are remarkably rare. Here we report an exceptionally preserved, articulated oviraptorid embryo inside an elongatoolithid egg, from the Late Cretaceous Hekou Formation of southern China. The head lies ventral to the body, with the feet on either side, and the back curled along the blunt pole of the egg, in a posture previously unrecognized in a non-avian dinosaur, but reminiscent of a late-stage modern bird embryo.

Comparison to other late-stage oviraptorid embryos suggests that prehatch oviraptorids developed avian-like postures late in incubation, which in modern birds are related to coordinated embryonic movements associated with tucking — a behavior controlled by the central nervous system, critical for hatching success. We propose that such pre-hatching behavior, previously considered unique to birds, may have originated among non-avian theropods, which can be further investigated with additional discoveries of embryo fossils.