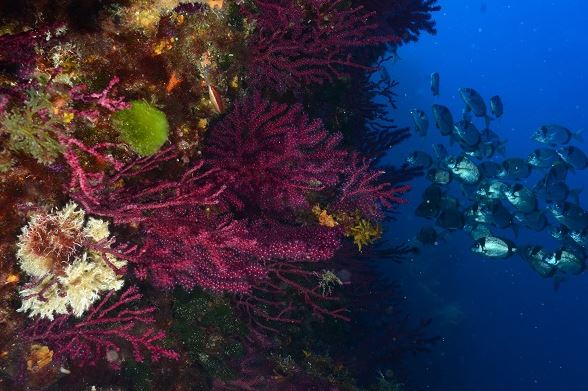 Marine heatwaves are dramatically affecting the marine ecosystems of the world and the Mediterranean is no exception. In the Mediterranean, these extreme climate episodes and its resulting massive mortality of species are getting more and more intense and frequent. To date, most of the studies analysed the effects of these perturbations on specific species and populations, although researchers still do not know how this affects the functioning of the involved ecosystems.

A new study led by the UB and the Institute of Marine Sciences (ICM-CSIC) has stated that marine heatwaves are having a strong impact on the functioning of coraligen, one of the most emblematic habitats of the Mediterranean due to the high diversity of species it covers and the high number of ecosystem services it provides.

The study states the loss of the few species that bring structural complexity to these coralline communities, that is, the architects of these habitats. An example of this is the gorgonian coral, which acts as forest trees and offers shelter to a great amount of marine species. According to the study, published in the journal Ecology Letters, gorgonians have been severely affected over the last years by several episodes of massive mortality caused by marine heatwaves in the Mediterranean.

“Gorgonians are sensitive to the climate change. In fact, their abundance has been reduced by 93% in some of the sampled sites where heatwaves have impacted. This is worrying because gorgonians play a critical role in coralligenous assemblages. They are the organisms that provide the three-dimensional structure that allows more than 1600 species to thrive in the coralligenous", says Daniel Gómez-Gras, predoctoral researcher at ICM-CSIC and the UB.

"Thanks to this study, we have been able to verify that the coralligenous reefs are losing the dominance of key functions, which are precisely those provided by the gorgonians”, says ICREA professor Cristina Linares, professor at the Departament of Evolutionary Biology, Ecology and Environmental Sciences of Faculty of Biology and member of the Biodiversity Research Institute (IRBio) of the UB. “This implies the loss of essential ecosystem services and the potential decline of species with great commercial value –such as scorpionfish and lobsters–, whose presence would be reduced due to the loss of habitats with high structural complexity" highlights the expert.

Increasing the vulnerability of the ecosystem

Unlike what happens in tropical areas, where many species can act as architects in these habitats, the Mediterranean has only a few, and therefore, they are likely to lose their function, experts warn. The most known ones are the precious coral (Corallium rubrum) and the violescent sea-whip (Paramuricea clavate), the species this study focused on.

"The loss of structural complexity makes coralligenous assemblages more vulnerable to disturbances, as the disappearance of some species makes it difficult for others to survive, leading to an acceleration of the degradation process of the community. It is like if the roof of a building collapses and the windows break. If they are not fixed, the building will eventually collapse", notes ICM-CSIC researcher Joaquim Garrabou, who also participated in this work.

Protected areas are also affected on the inside

To carry out this study, researchers analysed the results from monitoring programs in the Port-Cros National Park and the Scandola Natural Reserve (France), two of the oldest protected marine areas of the Mediterranean, effective on protection and conservation of natural resources. Such programs, carried out for over a decade, have been conducted by the Marine Biodiversity Conservation Group (MedRecover).

With the analyses of demographic and functional traits of coralline species, experts studied how the marine heatwaves affected the functions of these communities in two protected areas. Among the collaborators in the study were the teams of the University of Hawaii System (United States) and the University of Saint Andrews (Scotland, United Kingdom).

The results of the study stress the devastating effects of the climate change, both inside and outside the protected areas, in habitats that are essential for marine life in the Mediterranean, such as coralligenous assemblages. This “will be severely compromised in a near future due to the marine heatwaves”, authors warn.

The research study has been funded thanks to different projects in which the UB and ICM take part. Specifically, the HEATMED project (Ministry of Science, Innovation and Universities), and the European projects MPA-Engage (Interreg MED) and FutureMARES (Horizon 2020). The aim of these projects is to analyse the effects of the ocean warming in coastal marine ecosystems, as well as to promote efficiency of nature-based solutions as one of the pillars of the adaption strategy to climate change and its mitigation.

Twitter
Tweet
Altro in questa categoria: « Beta-blockers not likely to cause depression yet may contribute to sleep disturbances Talking to horses as we talk to young children »