The colour blue in the world of flowers: International study explores its rarity 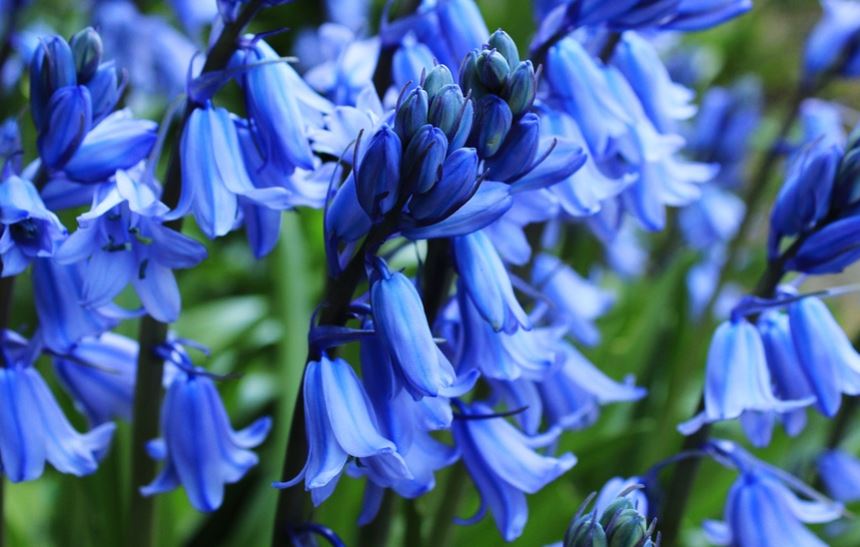 Blue is the favourite colour of more people in the world than any other, and the "blue flower" is considered a symbol of romantic longing. In nature, however, there are only a few plant species whose flowers contain blue colour pigments. An international research team led by Bayreuth ecologist Prof. Dr. Anke Jentsch has investigated the reasons for this. One important factor is the great chemical effort required to produce blue dyes, however differing colour perception of pollinators also plays a role. For bees, all the shades of blue assume a more conspicuous share in the colourfulness of flowers than they do for the human eye. The study was published in "Frontiers in Plant Science".

The interdisciplinary research team has compiled a multitude of findings on the colour blue in the world of flowering plants, and systematically correlated them for the first time. An evaluation of data from the TRY Plant Trait Database, one of the world's largest databases of plant traits, revealed that only seven percent of all flowering plants worldwide are perceived as blue by the human eye. Further, distinguishing between the flowering plants native to Europe according to pollination type is most revealing. Among the plant species that are mainly pollinated by wind or rain, there are virtually none that appear blue to humans. In contrast, the flowers of 7.5 per cent of all flowering plants that are mainly pollinated by insects or birds present themselves as blue to the observer. "This difference suggests that the colour perception of pollinating organisms has significantly influenced the development of flower colour over the course of evolution. It is therefore worth investigating the question of how flowers are perceived by their respective pollinators, and what interactions are triggered by this," says Prof. Dr. Anke Jentsch, Professor of Disturbance Ecology at the University of Bayreuth.

All abuzz over blue flowers

It has long been known that insects, birds and bats, which are essential for the reproduction of many species of flowers, are sensitive to different colour spectra than humans are. The human eye contains three types of photoreceptors that respond to red, green, and blue light. Bees, on the other hand, have a reduced sensitivity to red colours, are less able to distinguish between yellow and white, but do perceive colour patterns from the ultraviolet range. Blue tones are among the areas of the spectrum accessible to them which they perceive with particular intensity. "Bees therefore see the colourfulness of flowering plants quite differently from other pollinator groups or from us humans. They are particularly attracted to blue flowers," says Jentsch. "From an ecological point of view, we should actually rewrite the identification books. Since Charles Darwin and Carl von Linné, human perception of flower colours has been used to distinguish between plant species, even though it is not human perception of colour, but the interaction of plants with pollinators that is relevant for evolution."

A competitive advantage for flowering plants

The attraction of the colour blue for bees, however, raises the question of why only comparatively few of the plant species pollinated by insects and birds have developed blue flowers. Here, too, the researchers propose a complex answer. The production of a blue flower pigment is very complicated for plants. Six different colouring substances, so-called anthocyanins, and six corresponding molecules are involved in the chemical process, which together with metal ions form special ring structures. Only those species that have to prevail in fierce competition for pollinators make this great effort. This is particularly the case in some high mountain areas, for example in the European Alps or in the Himalayas. Here, the climatic living conditions are particularly unfriendly for insects and other pollinators. For flowering plants, on the other hand, which are native to very species-rich grasslands or meadows and often have to survive on nutrient-poor soils, blue flowers represent an important unique selling point. In competition with other species in their immediate vicinity, they are particularly conspicuous, so that pollinators are attracted to them even from larger distances.

The scientists warn that the loss of land in wilderness areas and cultivated landscapes, as well as the intensification of agriculture, in many cases not only contributes to insect mortality, but also further reduces the already low proportion of blue flowering plants. "There are numerous indications that the expansion of agricultural land, the use of artificial fertilisers, frequent mowing, and intensive grazing are all detrimental to species-rich vegetation. Thus, there is a danger that blue flowers will almost completely disappear from the landscape," says Dr Justyna Giejsztowt from New Zealand, a research associate at the Disturbance Ecology research group in Bayreuth.

Art as inspiration for research

The study was originally inspired by the 1920 poem "Fragmentary Blue" by the US nature poet Robert Frost. It deals with the relationship between the vast blue sky and the blue tones in nature that occur only in small fragments. Conversations about these lyrical reflections and the exchange of ideas about their own observations of nature on different continents provided the impetus for systematic research. The authors begin their publication with a tour d' horizon through cultural history, in which they point out the worldwide ubiquity of the colour blue in painting, literature, and religion - starting with ancient Egypt and Christian art in the Middle Ages, all the way to 20th century Impressionism.

The study, now published in Frontiers in Plan Science, is the result of close intercontinental collaboration between Prof. Dr Anke Jentsch from Germany (Bayreuth) and researchers in Australia (Melbourne), Brazil (São Paulo), Nepal (Kathmandu), Norway (Lillehammer), and the USA (Chapel Hill). The research work in Bayreuth was funded by the Federal Ministry of Education and Research as part of the SUSALPS project.