Discovery of a mechanism by which epithelial tumours cause developmental delays 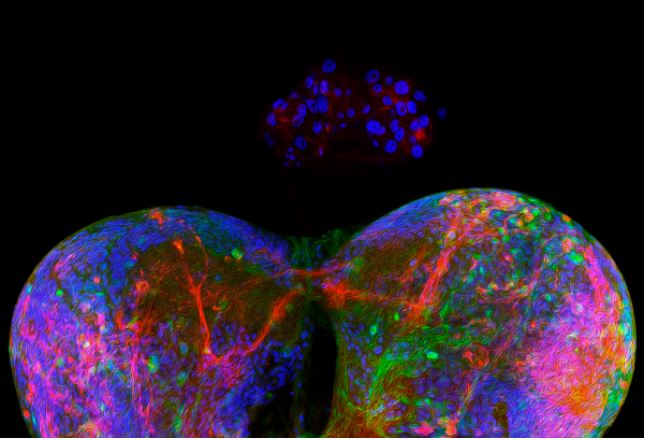 Conducted on the fly Drosophila, the study shows that tumours caused by chromosomal instability delay entry into the adult phase.
The tumours produce the Upd3 protein (equivalent to human Interleukin-6) to block the production of developmental steroid hormones. The work of IRB Barcelona's Growth Control and Development laboratory has been published in the journal Current Biology.
The systemic balance that coordinates the growth of an organism and its progress through the different stages of development occurs across the animal world and is regulated by internal and external signals. Examples of this balance are puberty in humans and metamorphosis in flies. These are transitions characterised by the production of steroid hormones and they mark the turning point that will determine the halting of growth and entry into the adult state. Certain human diseases, such as cancer and inflammatory bowel diseases (IBDs), cause a delay in this transition.

Led by Dr. Marco Milán, scientists at IRB Barcelona have discovered the mechanism by which malignant epithelial tumours affect the production of steroid hormones. Specifically, these researchers have found that the Drosophila Upd3 protein (equivalent to human Interleukin-6) is the main signal produced by tumour cells to influence hormone production and activate signalling pathways that block the transition to adulthood.

"This finding is highly relevant and can help us understand delays in the transition to puberty caused by various medical conditions in adolescents. In the end, what happens is that a damaged organ sends signals to the body to warning that it is not prepared for a process of change," explains Dr. Milán, ICREA researcher and head of the Development and Growth Control laboratory at IRB Barcelona.

A model to study cancer

To carry out this study, Dr. Milán’s group has used the genetic potential of the Drosophila fly to induce alterations in the epithelial tissue that simulate a tumour-like growth and mimic the capacity found in human carcinomas to send systemic signals.

"An animal model like the fly Drosophila allows us to study the entire phenomenon using a systemic approach. In this case, we have observed that tumour cells not only produce Upd3 to regulate the production of steroid hormones but also other molecules that act synergistically," says Daniela Romão, PhD student and first author of the article. "Interestingly, some of these signals cause a response from the body that resembles what happens in diabetic patients," says Daniela. These results open up new avenues to better understand why diabetes is a risk component in cancer patients.

The study has been funded by the European Commission through the ERDF and the Spanish Ministry of Science and Innovation (MCI/IED).