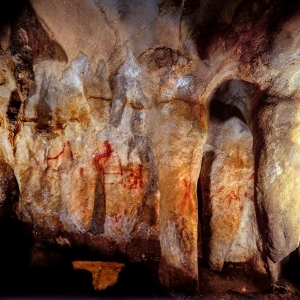 The journal Science has published a study in which the ICREA researcher João Zilhão, from the Seminar on Prehistoric Studies of the University of Barcelona (SERP-UB) takes part. The study shows new dates for Paleolithic art found in three Spanish caves. The new uranium-thorium dating method (T-Th), based on uranium radioactive disintegration, enabled researchers to date the paintings of the caves in Ardales (Malaga), Maltravieso (Cacers) and La Pasiega (Cantabria) to, at least, 64,800 years ago. These are the oldest datelines known so far in cave paintings worldwide. Actually, the new datings prove the authors of these paintings were the Neanderthals. João Zilhão states that “these results imply an important change of paradigm regarding human evolution so far”. “It has been proved –says Zilhão- that Neanderthals painted walls in the caves at least 65,000 years ago, thousands of years before the first African modern populations. Therefore, we can conclude that, from a cognitive perspective and symbolic thinking, Neanderthals were not that different from modern humans”.

The three caves that were studied display geometrical patterns, hand stencils and painted speleothems (mineral deposits like stalagmites and stalactites), everything in red. The datings for these works are dated at least 20,000 years prior the arrival of modern humans in Europe. The applied dating method, uranium-thorium (U-Th), allows researchers to set dates for small samples (a few milligrams) from deposits of existing calcite covering the paintings. The mentioned method does not have limitations of the radiocarbon dating, which is only applicable to a reduced number of cave paintings made with organic matter and which affects the integrity of paintings. Therefore, it has been proved that a lineal sign (scalariform) was made at least 64,800 years ago in the cave La Pasiega; a hand stencil was painted at least 66,700 years ago in the cave in Maltravieso, and a set of speleothems was covered in paint –as seen in the color concentration- in Ardales at least 65,500 years ago.

The recognition of the first symbolic and artistic skills of humanity is a topic of debate in the scientific field. These skills were associated with the first modern human populations, originated in Africa around 200,000 years ago, that arrived in Europe about 40,000 years ago. However, over the last years, new findings suggested Neanderthals dressed up with ochres and trinkets, and made small signs (mainly lines) on bones and stones. The now published results provide new study perspectives that imply a reconsideration of the current models on the origins of the symbolic thinking and the spreading of the first artistic skills of humans.

“Despite being different regarding their facial morphology, were Neanderthals like us humans, or were they from a different branch, less clever, which got extinguished without descendants? This question has been around since the first Neanderthal fossils were found in the 19th century”, says Zilhão. The researcher notes that the study published in Science shows Neanderthals were not different –from a cognitive perspective and symbolic thinking- and that “these defining traits of our species appeared in the early stages of human evolution, more than half a million years ago”. This means that it is “a view of human evolution in which the fossil variants have to be understood as ancestral, belonging to our ancestors, not as part of different species. That is, during most of its existence, human species were more diverse than nowadays: fossil humanity is not abnormally heterogeneous, the current humanity is abnormally homogeneous!”, he concludes. 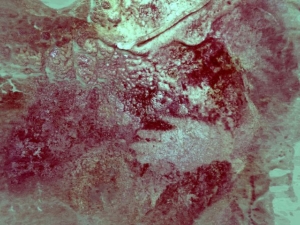 Also, the journal Sciences Advances has published another study by a group of authors led by Zilhão and another by the members of the research team of the study published by Science. Titled “Symbolic use of marine shells and mineral pigments by Iberian Neanderthals 115,000 years ago”, the article reports that the deposit in which the painted shells from Cueva de los Aviones (Cartagena, Murcia) were found, is between 115,000 and 120,000 years old. These results confirm that Neanderthals used sophisticated pigment mixes and decorated their bodies before those behaviours were documented among the first modern humans in Africa.