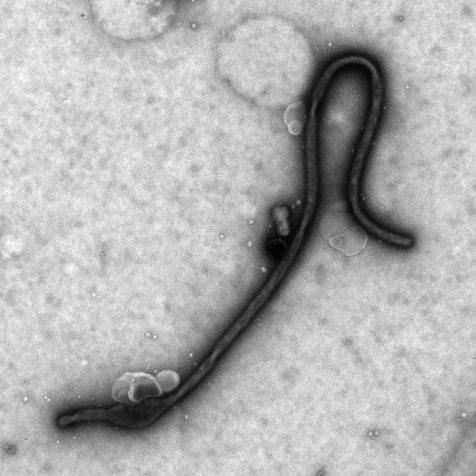 Researchers have identified a key process that enables the Ebola virus to infect host cells, providing a novel target for developing antiviral drugs. The deadly Ebola virus incorporates a cellular enzyme into its virus particles, facilitating the infection to the target cells, according to new research published in the journal PLOS Pathogens. When this enzyme Xkr8 is activated, it flips a phospholipid called phosphatidylserine (PS) from the inner layer of the Ebola virus’ membrane (envelope) to the outer layer. The exposed PS facilitates entry of the virus.  The researchers at Hokkaido University and The University of Tokyo generated ebolavirus-like particles by expressing viral proteins in cultured mammalian cells to investigate mechanisms by which Ebola virus enters target cells. When the researchers disabled or blocked the activation of Xkr8, the exposure of PS on the surface of the virus particles was reduced.  First appearing in Sudan and the Democratic Republic of Congo in 1976, Ebola has instilled fear wherever infections have emerged due to its high fatality rate ranging from 25% to 90%. Most recently, west Africa experienced a record-breaking outbreak in 2014-2016. The virus spreads via the bodily fluids of infected animals and humans. Currently, there are no approved drugs for treating Ebola. Scientists are beginning to unravel how the virus works, which is critical for developing effective treatments.

In Ebola virus-infected cells, the virus’ components replicate and assemble to generate progeny viruses. The progeny viruses bud from the surface of host cells, acquiring an envelope derived from the host’s cell surface membrane. The team from Hokkaido University and elsewhere have demonstrated that the Ebola virus enters the target cells through the interaction between glycoprotein (GP) on the virus’ surface and its receptor on the cell surface. In addition to GP, PS in virus envelope has been shown to help entry of the Ebola virus. To be recognized by the target cells, PS needs to be present on the surface of the virus particles. However, PS is typically found on the inner side of host cell membranes and it has been unknown how PS changes its location in the virus envelope. The researchers have found that Xkr8 is transported to the budding site along with GP, and incorporated into the envelope. Xkr8 is then activated, which leads to exposure of PS on its surface so the virus can enter the target cells.

Associate Professor Asuka Nanbo of the research team at Hokkaido University says, “PS is known to function in the entry process of various pathogenic viruses. So, we expect this pathway provides a potential target for developing new drugs against those viruses as well as the Ebola virus.”

Twitter
Tweet
Altro in questa categoria: « Vitamin A in cattle fodder is potentially protecting against cow's milk allergy Evolutionary biology: Sponges can economize on oxygen use »