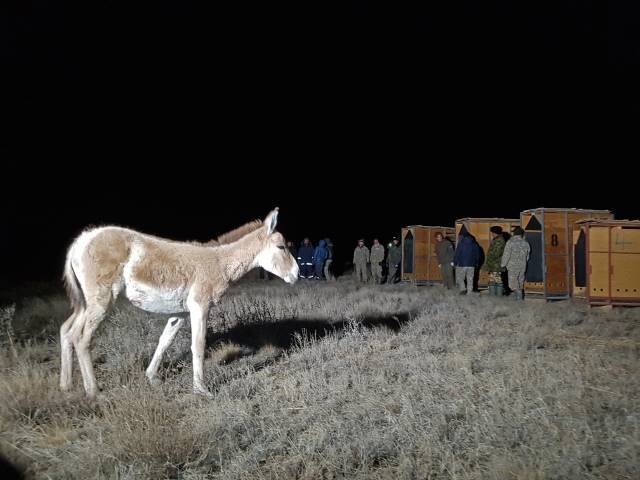 On 24th October 2017, a first group of nine animals was released into an acclimatisation enclosure on the edge of the Altyn Dala protected area in central Kazakhstan. The animals had been transported 1200 km by helicopter from Altyn Emel National Park in the southeast of the country. They will be released in early spring. This is the first step in a multi-year project that aims to restore the full range of large herbivores to this unique area of steppe habitat. Kulan once ranged across the Middle East and Central Asia – from the Mediterranean to the east of Mongolia. During the last two centuries, their range has been dramatically reduced to less than 3% of their former range. Although the species is doing relatively well in Mongolia, the Central Asian subspecies is classified as Endangered and only persists in small isolated populations in Turkmenistan, Kazakhstan and Uzbekistan.

Reintroduction of kulan to the central steppes of Kazakhstan
The current project aims to move 30-40 kulan from Altyn Emel to the central steppes during the next 3-4 years. “The initial translocation of nine animals this year was a pilot project to test the methodology and logistics of animal capture, handling, transport and release,” says Petra Kaczensky, research scientist from NINA, who co-coordinates the project. “The approach using a corral to capture animals, chemical immobilisation for handling, a helicopter for transport, and a large acclimatisation enclosure at the release site worked rather well. For future years we will do a bit of fine-tuning,” Steffen Zuther, project leader of the Altyn Dala Conservation Initiative and main implementation partner in Kazakhstan, points out.

Various circumstances have created a unique opportunity to conserve the species in Kazakhstan:

The project is coordinated by the Norwegian Institute for Nature Research (NINA) and implemented with the Association for the Conservation of Biodiversity of Kazakhstan (ACBK) in partnership with the Committee of Forestry and Wildlife (CFW) of the Ministry of Agriculture of Kazakhstan, the Royal Society for Protection of Birds (RSPB), Frankfurt Zoological Society (FZS) and Nuremberg Zoo within the framework of the Altyn Dala Conservation Initiative (ADCI). Technical veterinary assistance was provided by the Wildlife Conservation Society and University of Veterinary Medicine, Vienna, Austria.

Press images from The Norwegian Institute for Nature Research (NINA) ( http://foto.nina.no/default.aspx?aid=4396 ) may be used free of charge only in context with the project (Kulan reintroduction) and with mentioning the copyright as "John Linnell/NINA or Petra Kaczensky/NINA".

Press images from the Kulan Reintroduction, Kazakhstan - FZS Photography ( http://photos.fzs.org/Press-Photos/Kulan-Reintroduction/n-c4T5KH/ )  may be used free of charge only in context with the project (Kulan reintroduction) and with mentioning the copyright as "FZS/Rosengren".