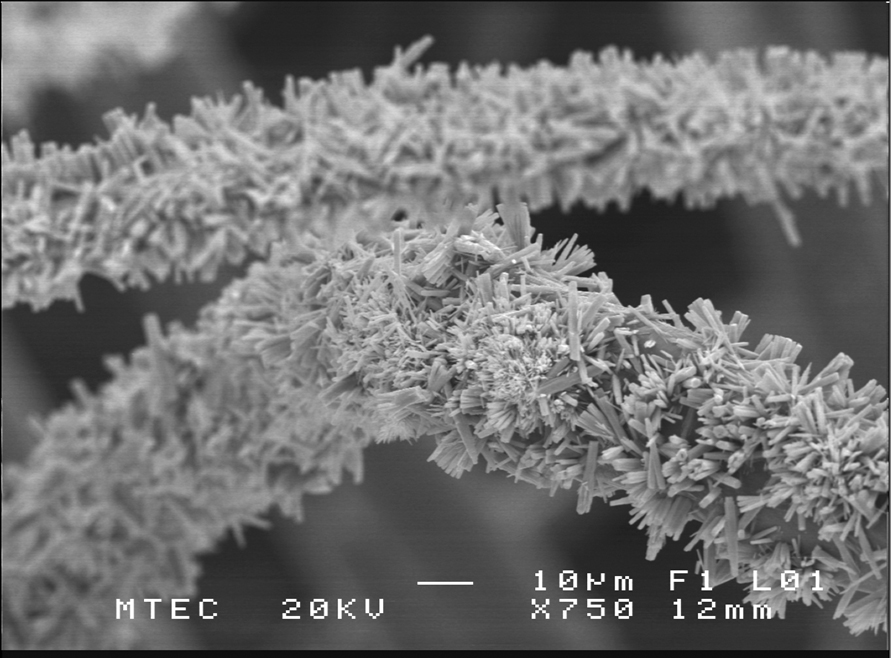 A close-up view of nano-sized semiconductors that initiate and speed up a natural process called photocatalytic oxidation.

Harnessing the Sun’s radiation to help rid the oceans of microplastics contamination is one of several technical innovations to be developed by a new EU-funded project. Beginning in November 2017, a system developed at KTH Royal Institute of Technology in Sweden for breaking down microplastics from personal care products will be tested for implementation in homes and wastewater treatment plants. While exposure to sunlight can degrade plastics into harmless elements, it’s a slow process. In some cases plastics can take several years to decompose. Joydeep Dutta, chair of the Functional Materials department at KTH, says this system will speed up that process by making more efficient use of available visible light and ultraviolet rays from the Sun. The system involves coatings with material of nano-sized semiconductors that initiate and speed up a natural process called photocatalytic oxidation, Dutta says. In a test household, these nano material coated filter systems will be placed at the exit of wastewater from homes. Similarly, in wastewater treatment plants these devices will be used to initiate microplastics degradation after the classical treatments are completed.

The photocatalytist membranes were created in partnership with the Swedish company, PP Polymer AB. Photocatalytic oxidation with titanium oxide and zinc oxide semiconductors has been used to convert volatile pollutants, oils and other substances into harmless elements such as water and CO2. Similar in concept to photosynthesis, photocatalysis activates the breakup of compounds by exciting electrons, which then causes water molecules to split into their constituent parts, hydrogen and oxygen. The material captures enough solar radiation from a minimum of available light to set off a reaction with the molecules of the plastic. The radicals then exchange electrons with the atoms that comprise plastic molecules, effectively pulling these contaminants apart into harmless compounds of CO2 and water. “The semiconductor material is able to excite the molecules and set off this process using the 40 percent of solar radiation that is visible light,” Dutta says.

Nearly every beach worldwide is reported to be contaminated by microplastics, according to the Norwegian Institute for Water Research. And, as if that weren’t bad enough, marine life ingest these plastics, which also adsorb pollutants such as DDT and PCB. “These plastics will start accumulating in the food chain, transferring from species to species, with direct adverse consequences to human population,” Dutta says. “Tackling plastic pollution at its source is the most effective way to reduce marine litter.” The project, titled Cleaning Litter by Developing and Applying Innovative Methods in European Seas (CLAIM), will also deploy floating booms at river mouths in Europe to collect visible plastic waste; and ferry routes in Denmark, the Gulf of Lyon, Ligurian Sea and Saronikos Gulf will be used to test a plastics measuring system that could be later deployed on shipping vessels. Coordinated by the Hellenic Centre for Marine Research (HCMR) in Greece, CLAIM involves 19 partners from across 13 EU countries, as well as Tunisia and Lebanon. It is funded with a Horizon 2020 Innovative Action grant (grant agreement number: 774586 — CLAIM — H2020-BG-2016-2017/H2020-BG-2017-1). The project will commence in November 2017 and be completed in 2021.