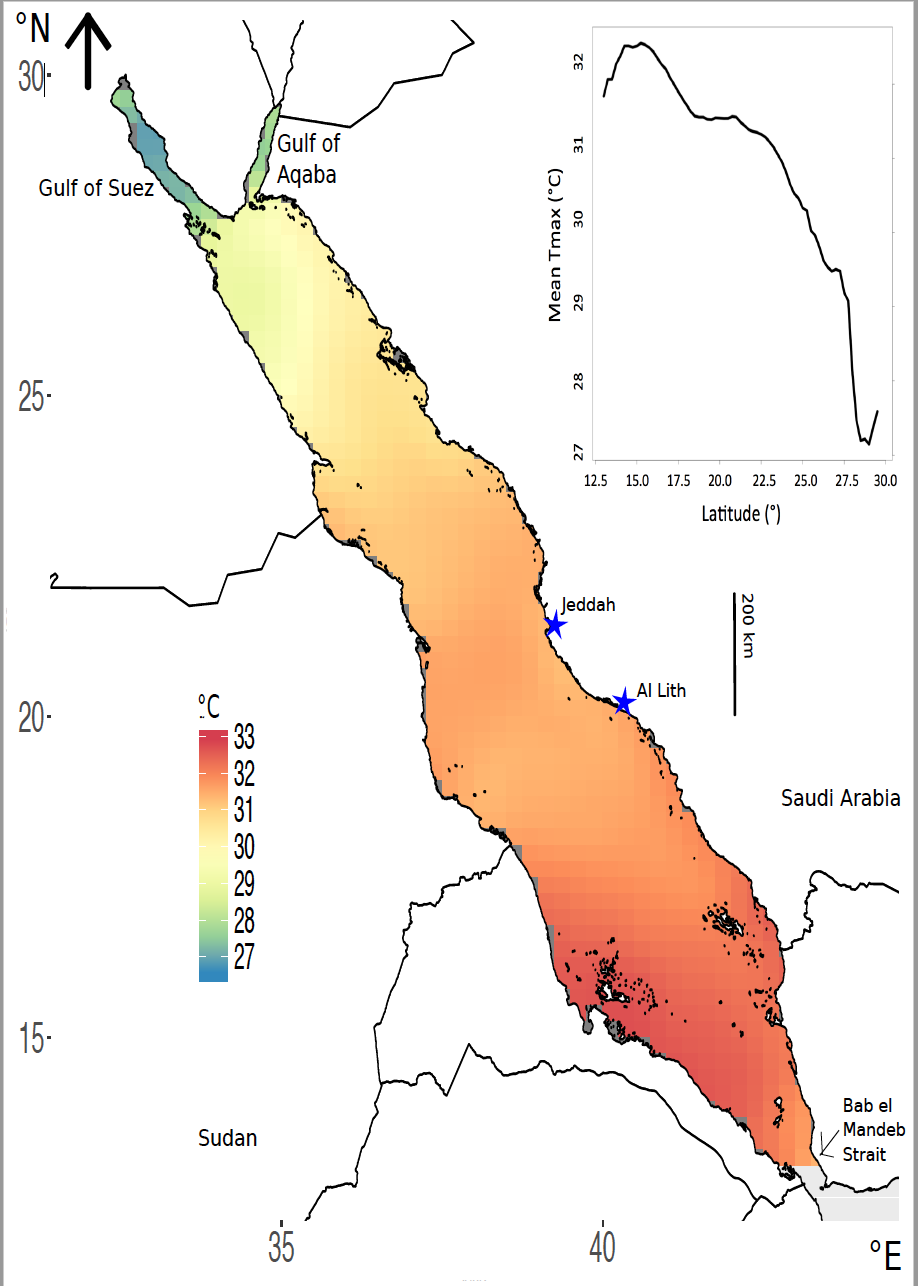 The mean maximum annual temperatures increase gradually from the north of the Red Sea to its south. Reproduced with permission from reference  2017 Nature Publishing Group

The world’s warmest sea is heating up faster than the global average, which could challenge the ability of the Red Sea’s organisms to cope. “The global rate of ocean warming has many consequences for life on this planet. Now we are learning that the Red Sea is warming even faster than the global average,” says KAUST PhD student of marine science, Veronica Chaidez. The analyses, conducted by a multidisciplinary team spanning all three divisions at KAUST, provide vital data that could help predict the future of the Red Sea’s marine biodiversity when supplemented by evidence to be gathered on the thermal limits of local organisms. Analyses of satellite sensing data from 1982 to 2015 show that the Red Sea’s maximum surface temperatures have increased at a rate of 0.17 ± 0.07°C per decade, exceeding the global ocean warming rate of 0.11°C per decade. Maximum sea-surface temperatures were found to increase from north to south along the Red Sea basin, with the coolest temperatures located in the gulfs of Suez and Aqaba in the far North. These two gulfs, however, are showing the highest rates of change compared to the rest of the basin at 0.40–0.45°C per decade; four times faster than the mean global ocean warming rate.

The Northern Red Sea experiences maximum temperatures throughout July, while the Southern Red Sea is warmest from late July to mid-August. Interestingly, sea-surface temperatures reached their maximum in an area on the Eastern coast of the Red Sea, about 200km south of Jeddah, from mid-August to early September. This anomaly may be caused by the unique wind patterns in this region. Maximum surface temperatures are also recorded about a quarter of a day earlier per decade. Systematic monitoring efforts are needed to assess the impacts of these rapid warming rates on coral bleaching and mass marine organism mortality events, adds Chaidez. Currently, no such monitoring exists in the Red Sea, but Chaidez is testing the thermal capacities of some of the basin’s plants and animals in her laboratory. A model that incorporates data on temperatures, organism thermal limits, and other relevant biological data could help predict impacts of warming on the local ecosystem. Evidence suggests that warm temperatures in the Red Sea are already challenging the capacity of its marine organisms to adapt and survive. Marine organisms generally adapt to rising ocean temperatures by migrating toward the poles. This is not an easy migration in the Red Sea since it is a semi-enclosed space, rendering its organisms vulnerable.

Twitter
Tweet
Altro in questa categoria: « How to detect the risk of dyslexia before learning to read G7 on Health, Science Suggests Global Action to Reduce the Impact of Climate on Health »