A new weapon against malaria 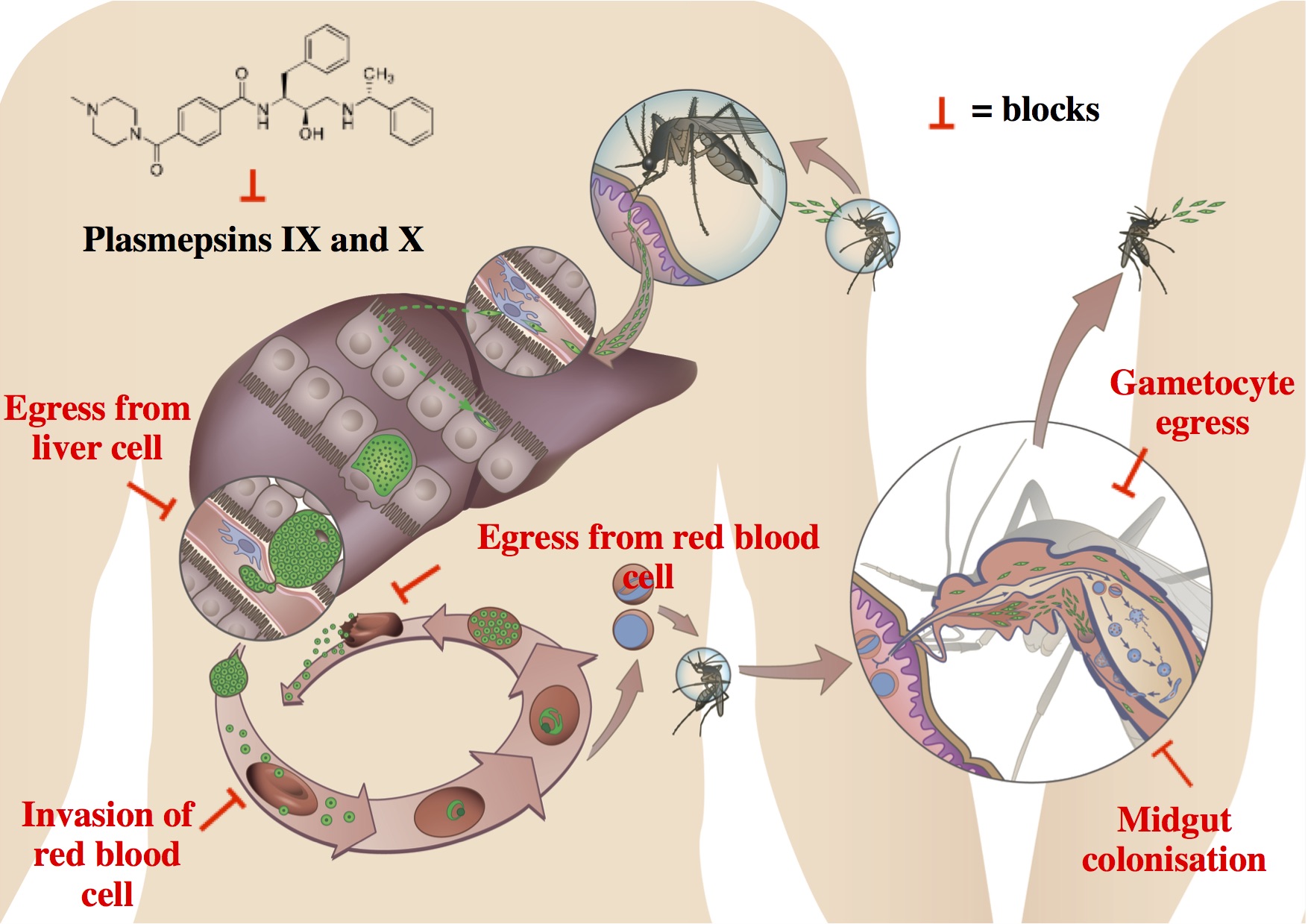 This study identifies the key roles of two Plasmodium asparyl proteases , Plasmepsins IX and X that are crucial for malaria parasites entry and exit from the infected host cells Remarkably, a peptidomimetic inhibitor of theses two proteases exhibits a potent preventive, therapeutic, and transmission-blocking activity against malaria through the mosquitoes. The picture is modified from Sturm and Hueussler, Med Microbiol Immunol (2007) 196:127–133 and designed by Cygny Malvar.

Malaria is a parasitic disease transmitted between humans through the bite of the female anopheles mosquito. Endemic in large tropical zones, Plasmodium falciparum kills more than 500’000 people per year, about 80% of which are children under the age of five. Although therapeutic strategies have been implemented for a long time, they have so far remained moderately effective. By identifying two proteases essential for the parasite’s survival and dissemination as well as a molecule capable of inhibiting them, researchers at the Universities of Geneva (UNIGE), Switzerland, and Bern (UNIBE) bring a new hope in the fight against malaria. Their discovery could lead to the development of drugs blocking not only the parasite development in human beings, but also the human to mosquito transmission and vice-versa. These seminal results can be read in Science.

Malaria typically causes waves of fever and can lead to serious complications and cause death primarily in young children whose immune systems are not yet armed to effectively fight the parasite. Available drugs failed to control the disease for two main reasons: the emergence of resistance, and the fact that their action is limited to the parasite forms proliferating in the blood of its human victims without blocking transmission of the disease. Indeed, individuals living in endemic areas develop natural immunity; when infected with the parasite, they only suffer from mild symptoms. However, when bitten again by a mosquito, they can transmit the parasite even if treated against malaria, allowing the disease to spread further. To eradicate malaria, it is therefore necessary to develop molecules targeting not only the blood forms of the parasite, but also the forms responsible for transmission to mosquitoes, as well as the liver forms, as the parasite passes through the liver before penetrating blood cells.

Led by Professor Dominique Soldati-Favre, a microbiologist at UNIGE Faculty of Medicine, a team of researchers discovered new targets for intervention. “Plasmodium is an obligate intracellular parasite, which means that its survival and spread crucially depend on the parasite ability to enter and exit the host cells. By taking a closer look at aspartic proteases we have discovered that two of these enzymes are critical for the parasite invasion and egress from infected host cells,” she explains. Proteases act as molecular scissors and cleave proteins as a way to control their activation. One of the two proteases identified by the Geneva scientists is essential for the maturation of factors involved in perforating the plasma membrane of infected cells and to egress. The second acts on adhesins necessary for invading host cells. These two proteases are therefore key elements for the survival and spread of Plasmodium. “Plasmodium has a very complex life cycle and encounters different host cells, whether in the blood, liver or even in the mosquito gut. Strikingly, it uses the same two aspartic proteases at each of these steps”, states Volker Heussler, professor at the Institute of Cell Biology at the University of Bern and co-author of the study. “By hitting several places at once, we do hope to fight the disease in human beings, but also to interrupt the transmission to the mosquito, which is the only way to effectively control the disease.”

A powerful inhibitor not prone to develop resistance in the parasite

A few years ago, several studies were conducted on inhibitors of other aspartyl proteases degrading haemoglobin, but these inhibitors were abandoned because of the limited therapeutic potential of this pathway. Today, these molecules are proving to be very interesting: “We have re-examined these inhibitors in the light of our discovery,” reports Mathieu Brochet, professor at UNIGE Faculty of Medicine, “and one of them proved to be particularly effective in blocking the two proteases we identified”. In addition, Dominique Soldati-Favre reveals “we could not select parasites resistant to the inhibitor, meaning that we might circumvent one of the greatest challenges in the fight against malaria. Indeed, since this inhibitor blocks two enzymes rather than just one, the probability that both will develop resistance at the same time is statistically extremely low.” These findings thus uncover an Achilles’ heel of Plasmodium. Supported by the Carigest Foundation, the Swiss National Science Foundation and the biopharmaceutical company Actelion, they could mark a turning point in the fight against malaria, provided these results are translated into therapeutic strategies adapted to the countries hardest hit by malaria. These results are also relevant in the bigger picture of parasite control: Plasmodium belongs to the phylum of Apicomplexa, a group of parasites with the ability to infect a wide spectrum of hosts that includes pathogens for both humans and animals. The same mechanism is conserved in other pathogenic Apicomplexa, as shown by similar results obtained with the parasite responsible for toxoplasmosis, Toxoplasma gondii, which were recently reported in eLife by the Geneva team.