A New Role for Autophagosomes in Neurodegeneration In evidenza 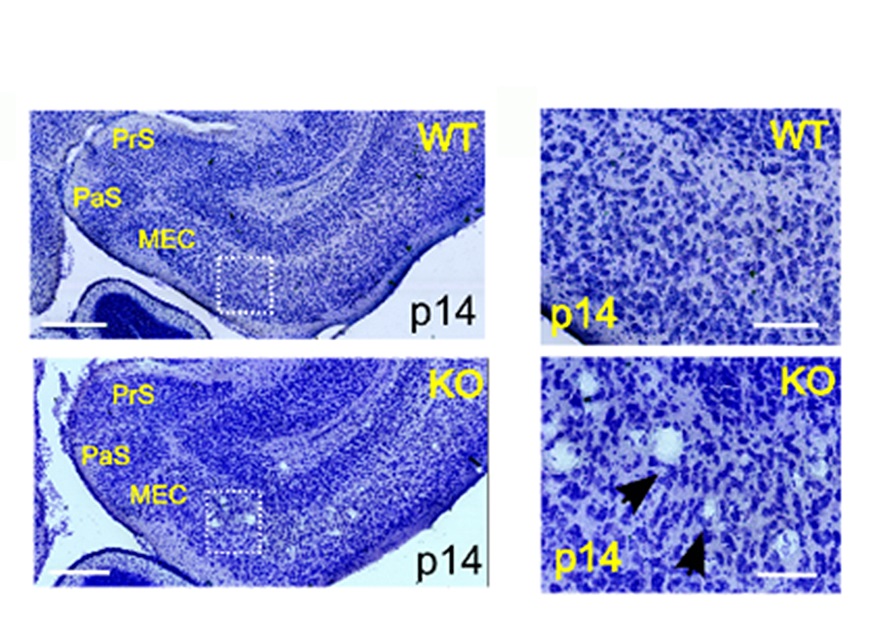 Figures: Neurodegenerative changes in the brains of mice with a missing adapter to bind the autophagosome motor; therefore, the autophagosomes are unable to transport BDNF. Left: Sections of a wild type mouse (WT) cortex and a knockout mouse (KO) cortex; Right: Enlarged depiction of the images on the left showing obvious neurodegeneration (arrows) in the brain of the knockout mouse. Picture: FMP

Autophagosomes are at the center of attention, at least since the Nobel Prize for Medicine was awarded for research on autophagy in 2016. The much talked about autophagosomes are small membrane vesicles in charge of waste disposal to promote recycling of its components. Scientists of the Leibniz-Institut für Molekulare Pharmakologie (FMP) in Berlin and the CECAD Research Center in Cologne who work on degradation and recycling processes in cells,  recently made a striking discovery: They found that autophagosomes transport growth signals such as brain-derived neurotrophic factor (BDNF) along axons (long slender nerve cell projections) to the cell body. This signaling process enables survival of nerve cells and stimulates the formation of new branched neurites that allow neurons to interconnect. Nerve cells in the brain will die if the autophagosomal taxis cease to operate. The new discovery shows autophagosomes in a completely new light and fuels hope for new treatments for Alzheimer's disease and other neurodegenerative diseases. The results of this research were just published in the renowned science journal 'Nature Communications'*.

The last Nobel Prize Award for Medicine made it clear to many people how important a role autophagosomes play in our bodies. These vesicles carry out the removal  of cell waste, in particular damaged proteins or even entire organelles, which also preserves cell nutrients for further reuse. In the 1990s, Japanese cell biologist Yohinori Ohsumi was first to study the mechanism of autophagy and to identify the genes for this degradation and recycling process in cells. In the fall of 2016, he received the Nobel Prize for Medicine for his pioneering work.

In the context of Alzheimer's disease, researchers used to assign autophagosomes the role of degrading and clearing aggregated proteins to counteract the disease. However, the collaborative research of scientists at the Leibniz Institute for Molecular Pharmacology (FMP) in Berlin and the CECAD Research Center at the University of Cologne now adds a new function to the role of autophagosomes in neurons: They  found that autophagosomes function as taxis for positive growth signals such as brain-derived neurotrophic factor (BDNF). Fewer 'taxis' or taxis without motor power will lead to reduced growth promoting signals arriving at the cell soma, and, in turn, the death of nerve cells. If the taxi was uncoupled from its motor the scientists observed significant morphological changes in the brains of these mice. They also detected neurodegenerative changes of all severity levels that eventually result in the death of the animal. This new work is published in the current issue of the renowned scientific journal 'Nature Communications'*.

The Identity of the Taxi Revealed

"While we knew that these BDNF taxis exist and that they deliver BNDF back to the cell body of nerve cells, we did not know that they were autophagosomes", explained FMP Director Professor Volker Haucke, who has been conducting research on the relationship between nervous system development and neurodegeneration for some time. "Autophagosomes as recycling assistants, thus, play a completely different and unexpected role in the prevention of neurodegenerative diseases ", adds Dr. Natalia Kononenko, first author of the study. Since 2015, she is the head of the research group on 'Molecular and Cellular Causes of Neurodegenerative Disease' at the University of Cologne.

Also, new is the finding that the signal-dependent formation of autophagosomes in axons and their transport to the cell body (soma) is part of a self-accelerating cycle because one target of incoming activating BDNF in nerve cells is the BDNF gene itself. Attenuation of the BDNF signal or its absence has devastating consequences. This may happen because autophagosomes are no longer generated in adequate numbers e.g. in aging. "Anything interrupting any part of this cycle will keep BDNF from moving back into the cell body of the neuron and the positive signal ceases. This may happen because the motor of the autophagosomal taxi is defective or because the formation of autophagosomes is reduced", explains Professor Volker Haucke. "In this case, we no longer see the regular formation and branching of neurites. Instead, we observe massive neurodegeneration."

No Growth Signal without Autophagosomes

Why do autophagosomes move BDNF back into the cell bodies of neurons? According to the scientists, this movement serves to control the environment. Axons and dendrites extend relatively far from the decision centers in the nerve cell bodies to sense their environment. Growth promoting signals released by neighbouring nerve cells upon uptake and axonal transport to the neuronal soma instruct the receiving nerve cell to extend long cell processes that may allow the nerve cell in turn to connect with further neighbours. According to one hypothesis, the autophagosomes provide protection during this ride by keeping the receptor-bound BDNF active. In this way, the autophagosomes safely convoy growth signals to the cell nucleus where the signals stimulate the formation of new nerve cell processes or branching.

By discovering the nature of the taxis and the adapter connecting the motor to the taxi, the teams around Professor Volker Haucke and Dr. Natalia Kononenko closed a large knowledge gap. Much more important still are the inferences from these insights. According to scientists, increasing the formation of autophagosomes will conceivably help in the fight against neuronal degeneration. That means increased hope for new treatments to combat neurodegenerative diseases such as Alzheimer's, Huntington's or Parkinson's diseases.

Currently, the FMP participates in a research project pursuing the above mentioned concept. This research is independent of the here described work on the roles of autophagosomes. In this project, physicians and colleagues from the basic sciences try to increase the number of autophagosomes in the bodies of mice but also of patients suffering from aging-induced memory impairment. They are trying to do this by way of polyamine supplementation. This nutrient occurs in abundance in food such as the Japanese soybean paste Natto. We will have to wait for a few years before we will know whether eating ample bean paste or other polyamine-rich foods stimulates the formation of autophagosomes and benefits patients. Still, the path is mapped out for the scientists. "We have seen the fatal consequences for neurons when too few autophagosomes exist or their transport function is defective. Obviously, we should look for substances, which stimulate the formation and functions of autophagosomes“, point out Dr. Natalia Kononenko and Professor Volker Haucke.