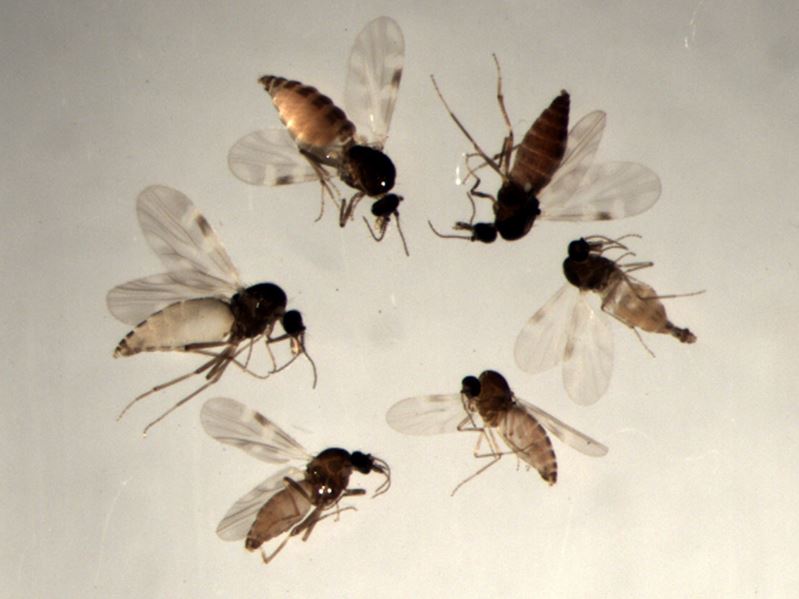 Ecologists at the UK-based Centre for Ecology & Hydrology (CEH) have led a study which informs optimal strategies for control of devastating midge-borne diseases like bluetongue and Schmallenberg virus that affect cattle and sheep in the UK and beyond. Adult female midges (males do not bite) are responsible for infecting farm animals with numerous diseases and are active and abundant between Spring and Autumn. This activity period varies across the UK and Europe, and the severity of disease is linked to how many midges occur at peak season. Essential movements of animals between premises and vaccination campaigns can only occur in the European Union within the Seasonal Free Vector Period over winter, when adult midges are absent or less active and don’t bite animals and pass on infection.

Models offer the opportunity to understand the interaction of biology and climate in producing seasonal patterns of adult midges and to tune control measures to their activity. Dr Steven White and Dr Bethan Purse led a team of scientists to devise a scientific model that explains the appearance, disappearance and peak numbers of adult midges in the UK on the basis of temperature effects on their survival and development. Working in collaboration with scientists at The Pirbright Institute in Surrey, England, and Rothamsted Research, Harpenden, England, the model integrated lab data linking temperature to demography and was tested out on year-round, daily captures of midges from Rothamsted's UK suction trap network. Because this model incorporates the biology underlying the seasonal patterns, it could then be used to simulate the impact of applying insecticides to adult midge populations at different times of year.

The results suggest that the timings of insecticide treatments could be crucial in midge and disease control. Concentrating treatments over the Spring midge peak could inadvertently increase the midge abundance later in the year due to a ‘density-dependence release effect’ (adult removal leads to a decrease in over-compensatory larval competition, increases larval survival and subsequent adult abundance).  Conversely, the model predicts that timing insecticide treatments over the Autumn midge peak has the greatest effect on population suppression. The last outbreak of Bluetongue in England, Scotland or Wales was in 2007 but SAC Consulting in March 2017 confirmed that the Schmallenberg virus, which can cause stillbirths or birth defects in livestock, was found in lambs in two Scottish flocks near the border with England.

Birth defects only happen if infected adult midges bite ewes and transmit Schmallenberg virus during a critical window of pregnancy, close to the end of the adult midge season (in Scotland). This model could help us to understand how such critical events in the livestock and midge life cycles coincide to cause disease under different sets of conditions like cooler and warmer years. Dr Steven White, a Theoretical Ecologist at the Centre for Ecology & Hydrology, said, “This new model sheds light on why we observe specific patterns of abundance for these important group of biting insects. Our results highlight that thinking about the timing of midge activity and insecticide release is very important for midge and disease control.”

“Understanding how biology and climate interact to govern adult midge seasons is critical to strategies for combating midge-borne diseases.  Being able to predict when and where the midges are actively biting livestock is invaluable for calculating the vector-free period in which livestock can be safely vaccinated and moved between premises”, said Dr Bethan Purse, a Disease Ecologist at the Centre for Ecology & Hydrology. Dr White added, “What was really interesting was that we found that the mechanism that midges employ to survive the winter in the UK, known as diapause, is very important in defining the following peaks of abundance.  Most studies only consider the months where midges are active, since the peak abundances are closely linked to the severity of disease.  However, our study suggests that non-active periods are also key.”

The scientists, who presented their findings in the journal Parasites & Vectors, say that more extensive modelling of Culicoides biting midges in different countries will help create better ways to control them with insecticides as well as predict instances of potential disease outbreaks. Co-author Dr Christopher Sanders, an entomologist at The Pirbright Institute, said, “Our research provides much needed data on the influence of over-wintering success of vectors on disease risk and the potential impact of mitigation strategies for combating Culicoides-borne diseases.” Co-author Chris Shortall, an entomologist at Rothamsted Research, said, “This study shows the value of long-term national monitoring networks for building robust models of how insect vectors respond to climate and in turn providing useful guidance for control strategies against livestock diseases.” The study was funded by the European Union (EU), Natural Environment Research Council (NERC) and the Biotechnology and Biological Sciences Research Council (BBSRC).