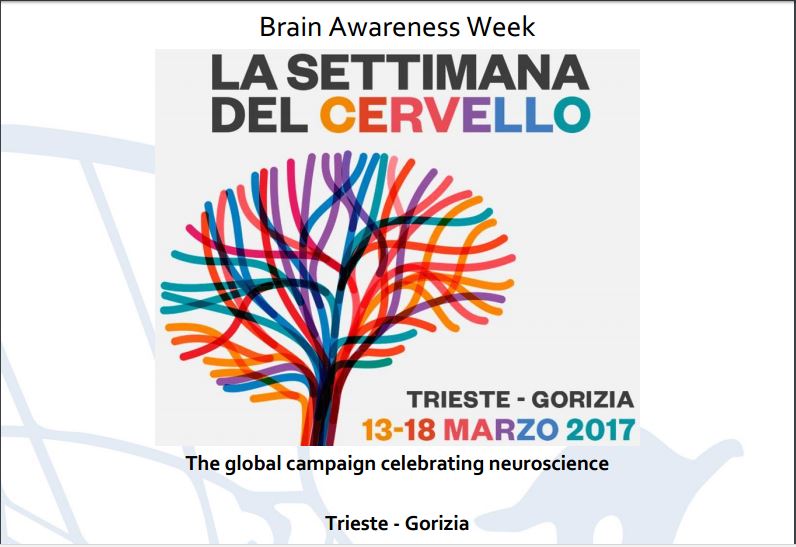 Artificial intelligence, language, time perception, nutrition, vaccines: these are some of the themes that will be covered from the 13th to 18th of March in Trieste - and for the first time also in Gorizia - for Brain Awareness Week. The local initiative is organised by the Interdisciplinary Laboratory of SISSA in Trieste and the BRAIN Centre of the Department of Life Sciences of the University of Trieste, in collaboration with the Science Centre Immaginario Scientifico and the Municipality of Trieste. Performances, panel discussions, educational laboratories, workshops, scientific cafés, conferences, visits to laboratories: a broad range of appointments for everyone and for all ages.

The programme of the 2017 Brain Awareness Week will begin on Monday March 13th at 5:30 p.m., at Auditorium del Museo Revoltella in Trieste, with a play characterised by music intermezzos entitled: “The Twilight of the Symbionts” by Giuseppe O. Longo, emeritus professor of Information Theory at the University of Trieste, with Giovanni Boni and Elke Burtul. The play will be followed by a debate with author Giuseppe O. Longo, Paolo Gallina, scientist and author, and Paolo Battaglini, neurophysiologist at the Department of Life Sciences of the University of Trieste.

On Tuesday March 14th at 6:00 p.m., at Seminario Vescovile of Trieste, the initiative will continue with the conference “Cognitivity and mood in advanced age. The styles of an active life.” Matteo Balestrieri, head of the Psychiatric Clinic at the Hospital of Udine and scientific regional head of the Association I.D.E.A. in Trieste, will talk about ageing and the benefits of physical activity, healthy diet and social participation in supporting elderly people’s cognitivity and fight against possible depression. On Wednesday March 15th the usual appointment with the Science Café will be held in Trieste. Starting at 5:30 p.m., at Antico Caffè Tommaseo, Enrico Tonin, professor of Microbiology at the University of Trieste and Elisa Giannini, professor of Nursing Sciences at the University of Trieste, will discuss the theme “Little enemies to fight off immediately: the early use of vaccines,” giving reassurances concerning children’s health and the use of vaccines, concentrating on those for the nervous system.

On Thursday March 16th at 6:00 p.m. the conference “A diet for the brain: the Mediterranean diet” will be held at Sala della Piccola Fenice in Trieste. Fiorenzo Conti, professor of Physiology at Università Politecnica of the Region of Marche and head of the Italian Society for Neuroscience, will explain the need of a correct diet for the wellness of both body and brain. Friday March 17th, double appointment for students enrolled in the upper secondary education. Starting at 9:00 a.m. at SISSA, the 2017 Stem Cell Day “The long and fascinating journey of stem cell research” will be celebrated: an international event aimed at spreading and disseminating awareness of biomedical sciences, with particular emphasis on stem cells. The event in Trieste is organized by Antonello Mallamaci, head of the Laboratory for Cerebral Cortex Development at SISSA, and Giampiero Leanza, neurophysiologist at the Department of Life Sciences of the University of Trieste.

Also at 9:00 a.m., at the Educational Centre of Valmaura of the University of Trieste, the regional phases of the Neuroscience Olympiad will be held with the five best students identified in 13 upper secondary schools of Friuli Venezia Giulia. During the contest three students will be selected for the national competition. The day will conclude at the Lovat Bookstore in Trieste with a panel discussion starting at 6:00 p.m.: “Will we survive populisms and technocracy? Consent creation between neuroscience and social media.” Gabriele Giacomini, researcher in Cognitive Neuroscience and Philosophy of Mind and councillor in charge of economic development at the Municipality of Udine, and Fabiana Zollo, expert in computational social science at the University Ca’ Foscari of Venezia, will illustrate what science says concerning mechanisms for forming opinions and creating consent.

On Saturday March 18th, from 10:00 a.m. to 1:00 p.m., Domenica Bueti and Davide Crepaldi will open the doors of their laboratories at SISSA. A varied and interactive path, devoted to “The neuroscience of time and language,” will give the possibility to learn how cognitive neuroscience enables understanding of the mechanisms through which our brain learns how to read, speak and “keep time” (Seating is limited. Registration is mandatory).

In the afternoon, an appointment covering similar themes will be addressed to young authors, readers and scientists (Age: 8-11 years old) in the educational laboratory “Playing with words.” Starting at 5:00 p.m., at the Lovat Bookstore in Trieste, kids will have the opportunity to play with Valentina Pescuma and Davide Crepaldi, cognitive neuroscientists at SISSA, who will show how the brain is capable of “predicting” what letter or word will follow another. To close the initiative in Trieste, at 6:00 p.m., always at the Lovat Bookstore, a panel discussion will be held titled: “Keeping an eye … on artificial intelligence.” Davide Zoccolan, head of the Visual Neuroscience Laboratory at SISSA, and Teresa Scantamburlo, expert in ethical and social implications of Big Data at the University Ca’ Foscari in Venezia, will illustrate how neuroscience helps understand how our brain is capable of processing an enormous amount of information, and the ethical and social implications of several recent applications of artificial intelligence.

Moreover, from Monday 13th until Friday 17th, SISSA neuroscientists will bring their research on wellbeing to Trieste's drugstores for an assessment of participants' physical, cognitive, sensory and emotional conditions. Participants will receive a free check-up and will have the opportunity to support research as well as receive information on cognitive disorders and local services specialised in care of the elderly (Registration is suggested). This year’s local edition of the Brain Awareness Week will involve, for the first time, Gorizia with the Science Café “Do we really use it all? Drugs for boosting the brain between neuroscience and fiction-neuroscience,” which will be held on Friday 17 March at 6:30 p.m., at Caffè Teatro. Our brain’s limits and potentialities will be the theme covered by Giuliana Decorti, pharmacologist, and Giampiero Leanza, neurophysiologist at the Department of Life Sciences of the University of Trieste, through a scientific analysis that will range from neurophysiology to neuropharmacology, also with a wink at Hollywood.

The Brain Awareness Week is a global initiative that celebrates the progress of brain research. Every year in March hundreds of universities, hospitals, groups of patients, associations, schools and institutes all over the world join efforts to give life to a campaign addressed to people of all ages. Founded in 1996 by Dana Alliance for Brain Initiatives, the Brain Awareness Week has involved up to now 4,100 partners in 99 Countries. The local edition of the 2017 Brain Awareness Week is organised by the BRAIN Centre of the Department of Life Sciences of the University of Trieste and by the Interdisciplinary Laboratory of SISSA, in collaboration with the Science Centre Immaginario Scientifico and the Municipality of Trieste, with the support of the Federation of European Neuroscience Societies and the Italian Society for Neuroscience.