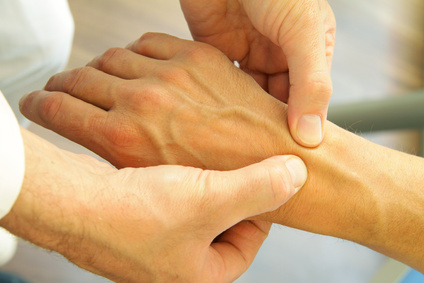 Between 3 and 5% of the population suffer from a form of inflammatory rheumatism. It affects approximately 250,000 – 400,000 people in Austria. Rheumatoid arthritis is one of the commonest and also the most dangerous forms of this inflammatory rheumatic disease. Around 30% of patients achieve remission, that is to say successful control of symptoms, after just one or two years. However, despite frequent changes in treatment, many other patients have to endure the active form of the disease on an ongoing basis. A multicentre, multinational study headed up by rheumatologist Daniel Aletaha of MedUni Vienna as principal investigator has now shown that a new drug (sirukumab) is a very promising treatment option for these "refractory" patients. The study has now been published in the world-leading journal "The Lancet".

Nowadays, treatments for rheumatoid arthritis are changed very quickly, once it is established that one is failing to effect any significant improvement. This means that many patients can be helped very quickly. On the other hand, there are patients who do not show any significant improvement even after the second or third biologic drug treatment – typically with TNF inhibitors (which blockade the Tumour Necrosis Factor TNF, which is involved in systemic inflammation). The new drug now offers a new option for such patients. This is the result of one of the largest multicentre, international studies so far into difficult-to-treat rheumatoid arthritis, focussing on this new mechanism of action, an interleukin-6 cytokine blockade. In this treatment, the monoclonal antibody sirukumab directly inhibits the messenger substance IL-6, which, like TNF, is responsible for inflammatory processes in the joints.

"We were able to demonstrate this in one of the largest study populations to date, with around 900 patients in 35 countries. Despite having previously received treatments with biologic drugs, these patients still had a persistently active disease. Treatment options had been practically exhausted for many of these patients. However, even in this group of patients, treatment with sirukumab brought about a significant reduction in the inflammatory action of the disease," explains Daniel Aletaha of MedUni Vienna's Department of Medicine III (Division of Rheumatology, Head: Josef Smolen). The efficacy and safety of sirukumab were tested in two different dosages (injections of 50 mg every 4 weeks or 100 mg every 2 weeks). The 100 mg dosage proved to be slightly more effective. "These results are very significant in the case of a progressive, inflammatory, musculoskeletal disease such as rheumatoid arthritis, especially for those patients who are resistant to treatment," says the MedUni Vienna expert. The drug could be approved very soon.

Twitter
Tweet
Altro in questa categoria: « New autoimmune endocrine disease triggered by thymomas Sickle cell disease: remission of the signs of the disease in the first patient in the world treated with gene therapy »