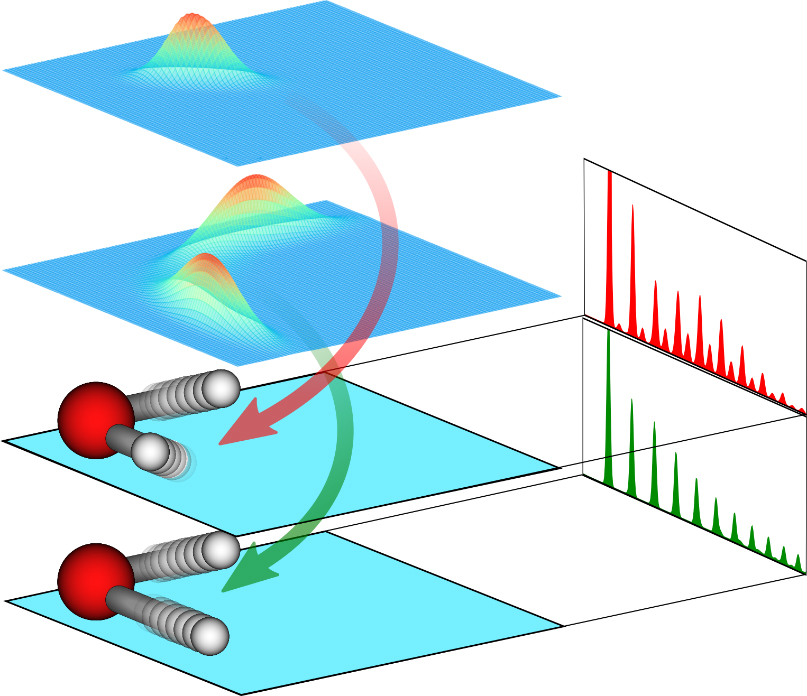 A new technique enables scientists to break down the collective atomic motion in a molecule into elementary components. (Image: KTH Royal Institute of Technology)

Every molecule holds a complex landscape of moving atoms – and the ability to single out and examine individual nuclear vibrations may unlock to the secret to predicting and controlling chemical reactions. Now a new method, developed by researchers in Sweden, enables biotech researchers to do just that. The new method offers unprecedented detail in measuring molecular motion and energy – enabling better control and understanding of chemical reactions in the field of biotechnology research. The technique, which was recently published in Nature Communications, uses X-ray scattering to measure the specific movements of atoms in a molecule with extreme energy resolution.

“The idea is based on exciting a molecule to a high-energy, localized state,” says Victor Kimberg, a researcher in the department of Theoretical Chemistry and Biology, at KTH Royal Institute of Technology in Stockholm. The X-ray radiation that it emits then scans the energy landscape of the molecule with a level of precision that Kimberg compares to observing the movements of individual insects from on top of a mountain. Every molecule has its own energy “landscape”, or the full multidimensional spectrum of motion that atoms undergo when the molecule is energized. These motions include bending and stretching of bonds. Expressed in geometric terms, the relationships of atoms to one another in a single molecule are among the key things scientists need to know in order to determine a molecule’s potential energy surface (PES) – an important value in the study of molecular structures, properties and reactivity. “The PES is useful for processes such as catalysis and photochemistry,” Kimberg says. For the first time, the technique enables scientists to break down the collective atomic motion in a molecule into elementary components, he says. “We can now go further than examining the collective multidimensional atomic motion in a molecule, and look at specific vibrations along selected reaction coordinates,” he says. “We are not aware of any other way to do this, so it looks like our idea is new.” Typically when a molecule is excited, the only measurements available show all atomic motion simultaneously. The full PES landscape is complex with all types of vibrations. Kimberg says that with the method they propose, x-ray photon energy can be tuned to excite vibrations of a singled-out type of nuclear motion – which he says can serve as a basis for developing methods of reaction control. “We show clearly that tuning the x-ray photon energy in resonance with one core-excited state induces only symmetric stretching motion; while tuning to another core-excited state excites exclusively the bending motion,” he says. The measurements were conducted at the Swiss Light Source (SLS) synchrotron laboratory in Zurich, in collaboration with the KTH group, comprised of Kimberg, Faris Gel’mukhanov and Hans Ågren, who were responsible for the underlying theory and simulations. Also involved in the resonant inelastic X-ray scattering (RIXS) project were researchers from Stockholm University; Potsdam University; Helmholtz-Zentrum Berlin for Materials and Energy; and Paul Scherrer Institute, Zurich. The paper, Selective gating to vibrational modes through resonant X-ray scattering, is published in Nature Communications, doi:10.1038/ncomms14165.