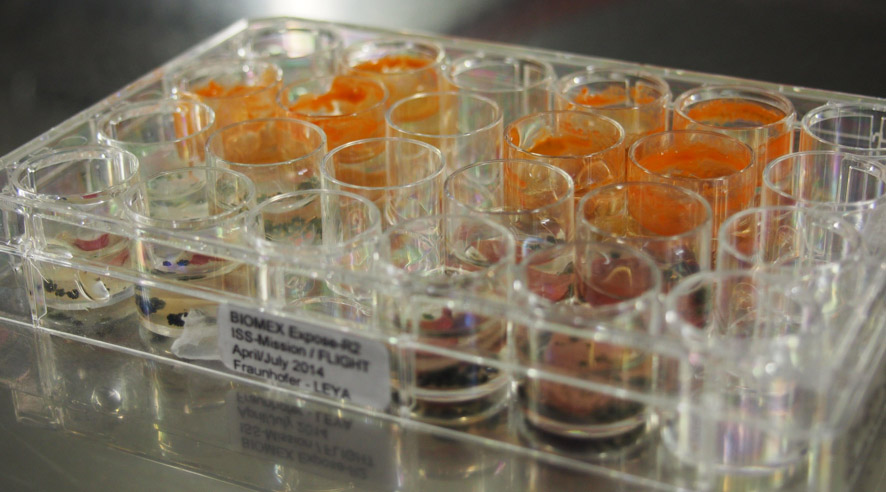 The many different organisms from all participating partners were all mounted in such trays and then exposed to space on the outside of the ISS for one and a half years. © ESA/ROSCOSMOS | Picture in color and printing quality: www.fraunhofer.de/en/press

In a long-term experiment on the International Space Station, Fraunhofer researchers studied how the extreme conditions in space affect algae. Fraunhofer conducted this experiment in close cooperation with German and international partners. Research findings could benefit industrial applications and perhaps a mission to Mars.

• Experiment in space: algae spend two years on the outside of the ISS.

• CCCryo organisms from the Fraunhofer Institute for Cell Therapy and Immunology IZI in Potsdam, Germany were subjected to extreme temperature fluctuations, the vacuum of space, and cosmic radiation.

• Practical application in the food and cosmetic industries.

They’re alive! Two algae survived 16 months on the exterior of the International Space Station ISS despite extreme temperature fluctuations and the vacuum of space as well as considerable UV and cosmic radiation. That was the astonishing result of an experiment conducted by Dr. Thomas Leya at the Fraunhofer Institute for Cell Therapy and Immunology IZI in Potsdam in cooperation with German and international partners. This labor-intensive experiment was part of the large-scale Biology and Mars Experiment (BIOMEX), a project coordinated by Dr. Jean-Pierre de Vera at the German Aerospace Center (DLR) in Berlin. Dr. Leya himself had isolated the green algal strain CCCryo 101-99 of Sphaerocystis sp. on Svalbard, a Norwegian archipelago, and prepared it together with the cyanobacterium Nostoc sp. (CCCryo 213-06), a blue-green alga from Antarctica. CCCryo stands for Culture Collection of Cryophilic Algae. Nostoc sp. and Sphaerocystis sp. are examples of cold-loving, or cryophilic, strains. They have special adaptation strategies to oppose cold and desiccation, allowing them to survive even under extreme conditions.

Dr. Leya heads the Extremophile Research & Biobank CCCryo Working Group at Fraunhofer’s Bioanalytics and Bioprocesses IZI-BB branch in Potsdam. For the past 18 years, the group has been studying the survival strategies of cryophilic algae, cyanobacteria, mosses, fungi and bacteria found in polar regions. Researchers had already ascertained in the laboratory that algae are largely unsusceptible to long-term

desiccaton stress, extreme temperatures or UV radiation. Yet the extreme conditions of near-Earth orbit cannot be fully simulated in labs.

“We slightly desiccated the algal strains in preparation for their time in space,” ex-

plains Dr. Leya. A Progress spacecraft transported the organisms into space on July 23, 2014, and a Soyuz capsule returned the algal cultures to Earth. All in all, they had to endure some 16 months on the outside of the ISS – with only neutral-density filters reducing the effects of radiation. Sensors measured and logged temperature changes and amounts of cosmic radiation.

Researchers did not merely want to learn whether the algae would survive in near-Earth orbit; they also focused on how the organisms in vacuum would respond to UVA, UVB and UVC radiation. “We expected the organisms to survive the vacuum and the temperature fluctuations between minus 20 and plus 50 degrees Celsius as well as the UVA and UVB radiation. But we were surprised to learn that the algal strains were left unscathed by parts of the extremely harmful UVC radiation,” says Dr. Leya. What’s more, the green algae survived surprisingly well in the dryness.

Researchers will now scrutinize the adaptation strategies of the blue and green algae. Because UV radiation can damage human DNA, the Technische Universität Berlin and the DLR are studying the DNA of the ISS algae to determine whether it was damaged and, if so, to what extent. They are also using spectroscopic techniques to analyze the biomarkers of carotenoids in the algae. Experts use the term “biomarker” to refer to any biomolecules and their measurable characteristics. These findings are significant in many ways – including a mission to Mars someday. The production of food on Mars would be essential for survival, should people colonize the Red Planet in the distant future. Algae produce oxygen and proteins, making them a good source of food; particularly hardy strains could be grown in special greenhouses or semitransparent tents.

Researchers are also curious to know if, millions of years ago, organisms or early life forms from space perhaps gave rise to life on Earth. Early forms of life might have reached Earth via meteorites. This theory of panspermia, as it is known, might experience a revival thanks to the ISS algae experiments.

Components of algae as nutritional supplements and sun protection

Various industries will likewise benefit from the findings of the ISS algae experiment. Possibly cosmetics manufacturers will soon be able to manufacture UV-protection creams that contain components of algae. For the food industry, algae contain appealing nutritional supplements thanks to their efficient repair mechanisms and high content of omega-3 fatty acids such as eicosapentaenoic acid (EPA). Appropriate manufacturing methods are still very costly, but should become commercially viable in the near future.

Dr. Leya has collected nearly 500 algal and other organisms in polar regions and other extreme localities worldwide. But experts believe that well over one hundred thousand species exist – of which only a fraction has been identified. This means chances are good that these underestimated organisms will provide another surprise or two.