“Europe’s Demographic Future. Where the Regions Are Heading after a Decade of Crises” 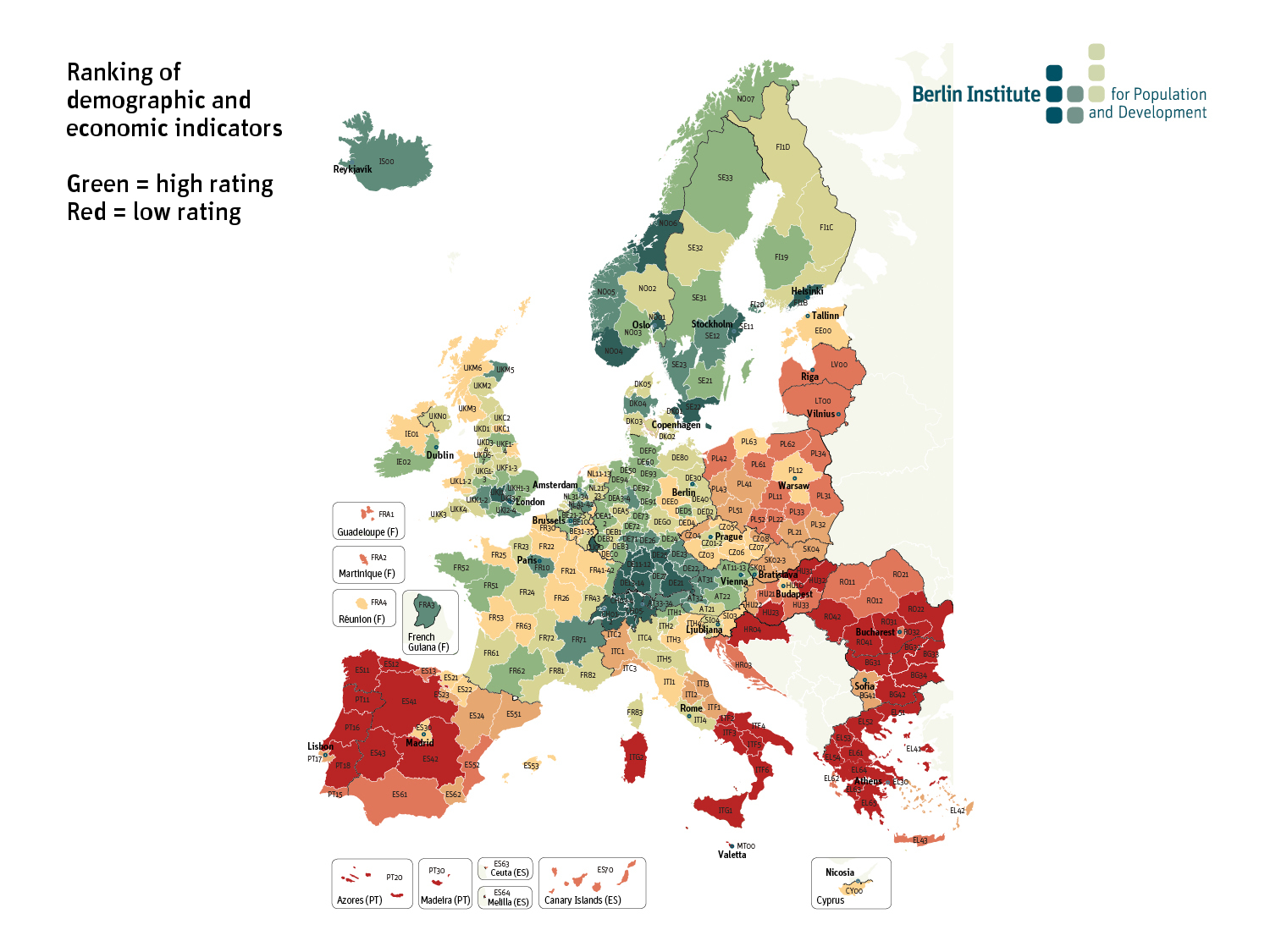 Europe is demographically divided. In the north, west and centre of the continent, comparatively high fertility rates and immigration are ensuring population growth for the foreseeable future. By contrast, many regions in southern and Eastern Europe are threatened with accelerated aging processes and marked population losses.

Europe is not just the proverbial “old” continent. Its populations are also on average older than elsewhere in the world. Even now, there are only some three persons of working age to every pensioner. By the middle of the century, this ratio may fall to one to two. This will have consequences for the economy and social systems. It will become more difficult to finance social benefits, and companies will find it harder to find suitable personnel. “This is all the more serious in view of the fact that the economies of the twenty-first century require well-qualified people rather than major industrial plants”, says Reiner Klingholz, Director of the Berlin Institute for Population and Development.

Just how well prepared Europe is to meet these demographic challenges differs from one region to another. This is shown by the Berlin Institute’s study, which analysed a total of 290 regions. The highly developed regions of Switzerland, southern Germany and Scandinavia are in particularly good shape – in some places, including the north of the continent, because of their high fertility rates and good education systems; in others, especially Germany, because of immigration from both European and non-European countries. On the other hand, the prospects of the peripheral regions – in southern and Eastern Europe, which are in any case economically weaker – are further dimmed by the exodus of young people. By the middle of the century, the average age of the population is likely to be highest in Greece and Portugal – and those countries’ populations will also be smaller than they are today. “In many parts of southern and Eastern Europe, only the regions in and around the capital cities are managing to stabilise demographically, while rural areas are increasingly losing people”, explains Stephan Sievert, one of the authors of the study.

The demographic situation is also a consequence of the numerous crises and upheavals that Europe has experienced over the past decade. For example, the economic crisis triggered a new wave of migration from south to north. The so-called refugee crisis has led in many places to an unexpected rise in the number of inhabitants. “The integration of the new arrivals will thus be a major future task for Europe”, Stephan Sievert adds. “Only if countries succeed in quickly getting immigrants and refugees into employment will the latter be able to participate fully in society”. In addition, immigrants who have successfully integrated can help to cushion the effects of these demographic challenges. Many European states have recognised this fact and are gradually expanding their immigration channels. Others are more sceptical. Particularly in the post-socialist states many people reject immigrants, especially those from outside Europe. But these countries, too, will have a great need for immigration in the medium term. In the Czech Republic, for example, there is already almost full employment today, and employers are likely to urge a more liberal immigration policy in future.

Demographic problems can also be mitigated by better integrating previously disadvantaged groups, such as women, into working life. Northern Europe has been particularly successful at doing this. “In Scandinavia, but also in the Baltic states, there is now scarcely any difference between male and female employment”, says Reiner Klingholz. “In southern Italy, by contrast, not even one woman in two of working age is engaged in paid work.” This has to do not only with cultural differences but also with the availability of childcare, which allows mothers to go back to work soon after the birth of a child. A good family policy would be important precisely in these regions, since fertility rates have fallen here in parallel with the economic crisis in many places.

So how do Europe’s regions stand in demographic terms? The Berlin Institute for Population and Development has examined this issue in its latest study, “Europe’s Demographic Future”. The overall findings, which are based on various indicators of demographic and economic development, show that the challenges are greater in the south and the east of the continent than they are in the north and the west.