In an article published recently in the American Journal of Physical Anthropology, researchers from the Paleophysiology and Ecology Group of the Centro Nacional de Investigación sobre la Evolución Humana (CENIEH) analyzed the influence of body proportions on the cost of locomotion by means of an experimental energetic study with 46 subjects of both sexes, whose results indicate that the walk of Pleistocene hominins was no less efficient energetically than that of current humans. The energy cost of locomotion is a question that has been widely studied and debated within Paleoanthropology because of its important implications. The researchers used the relationship between the width of the hip, the length of the femur and the body mass to model this cost in a large number of extinct hominins. Traditionally, it was thought that the leaner skeletons of modern humans reflected biomechanical advantages which made locomotion a more efficient activity. The slimmer pelvis of our species entails greater difficulty for childbirth, but it reduces the force the abductor muscles of the hip have to exert to maintain the stability of the pelvis while walking. 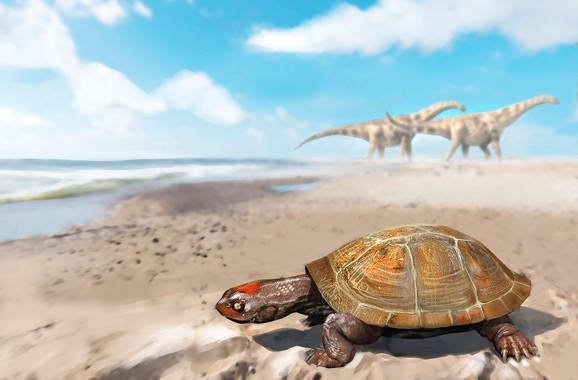 About 95 million years ago, a river turtle adapted to marine environments and made an extraordinary migration from the ancient continent of Gondwana, which grouped what is now Africa and South America, to Laurasia, the Northern continental mass of which Europe, Asia and North America were part. Its remains, found in the town of Algora in Guadalajara (Spain) and in Portugal, are the evidence of the first known dispersal event of a turtle from Gondwana. The researchers themselves call the turtle 'traveler', but the journey of Algorachelus peregrinus, as they have called it, did not start in Algora (Guadalajara-Spain), where it was recently discovered, but in Africa during the Upper Cretaceous.
"It is not just any turtle, but, as the name suggests, it gives us the necessary clues to describe how a successful migration occurred about 95 million years ago; this journey would have drastic consequences," explains Adán Pérez -García, researcher in the Evolutionary Biology Group of the UNED, the National University of Distance Education (Spain), to Sinc.
Millions of years ago, the distribution of the continents was not as we know it now. The rupture of Pangea -the supercontinent formed about 300 million years ago- gave rise to two large continental masses: Gondwana -in which the current Africa and South America, among other regions- joined together and Laurasia - which included North to Europe and North America, among others.